GPS receivers which are connected to a physical serial port (COM,ttySxx) should work out of the box.

USB receivers connected through USB cable to the computer might also work instantly, if they utilize a serial-to-usb adapter. Check if a new serial device (COM,ttySxx) is created when connecting the device to the computer. If so this probably is your interface to the GPS receiver. Sometimes additional drivers have to be installed for this mode of operation.

There are programs which interface GPS receivers and install virtual serial ports. If you find one for your gps device which is not mentioned here feel free to add it for others to find.

One commercial non-free alternative might be the GpsGate software. It has successfully been tested to work with Garmin eTrex Vista HCx unit on Windows Vista 32 bit.

In conclusion: GPS extension needs a serial port, either physical or virtual, delivering the GPS data. It is planned to support gpsd (over network) and file input in the future. Feel free to contact the author if the need arises on your site.

Consider downloading CTS extension (cts_<version>.zip), if you plan to work in a different reference system than your gps device outputs (usually WGS84).

Refer to Installation Steps and README.txt file in the downloaded archive for detailed installation instruction. These may change from version to version, so please read them carefully and follow them in detail.

Requirements - Make sure that

NOTE
GPS plugin is scanning the serial ports only during OpenJUMP startup. It will not see ports which are created later.

After starting OpenJUMP you should see a new menu item 'GPS' in the main menu bar (Fig. 1). 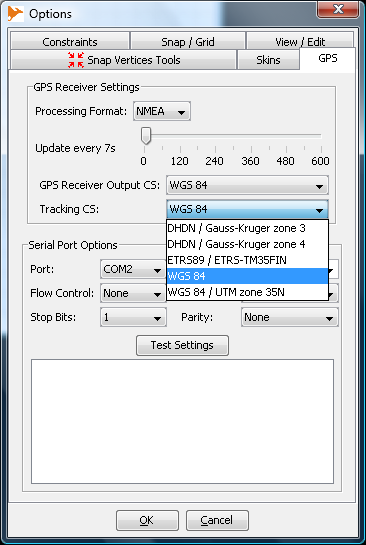 NMEA, Garmin or Sirf. Only NMEA tested so far.

This setting must suit the GPS output. The default is WGS 84 which is also supported by all GPS receivers. If GPS is configured to send out coordinates in some other systems, OpenJUMP GPS plugin needs to have definitions for that system. They are stored in the cs.conf file which is located in the lib/ext/cts directory. The format used for defining the coordinate system is OGC Well Known Text. Good source for findig the projection definitions is spatialreference.org. For example string needed to add support for UTM zone 35N projection can be found from http://spatialreference.org/ref/epsg/32635/ogcwkt/

Tracking CS (only available when CTS Extension is installed)

This setting must suit the projection that is used in the OpenJUMP project (task) or layer data loaded.

These settings setup the serial port the GPS receiver is connected to. Refer to your receivers documentation for the correct settings. For NMEA receivers they are usually as follows

If GPS is setup correctly then pressing the Test Settings button will show the raw output of the GPS receiver. e.g. a NMEA receiver, see Fig. 3 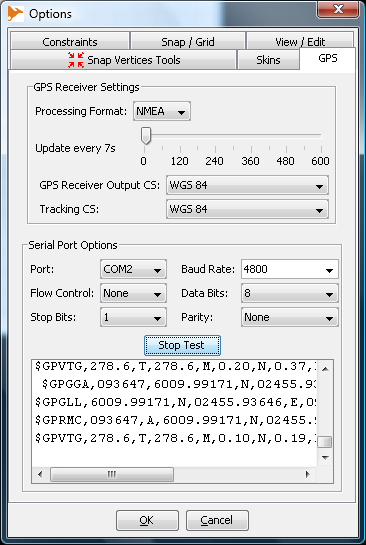 Sometimes the extension complains that it can't find any serial ports.

In this case and in cases where the serial port your device is connected to is missing proceed as follows.

Serial device is missing aka. Found no serial ports

For troubleshooting OJ has to be started with console output enabled. To view the console start OJ with the correct script for your operating system.

OJ should start and additionally a console window should appear, similar to this 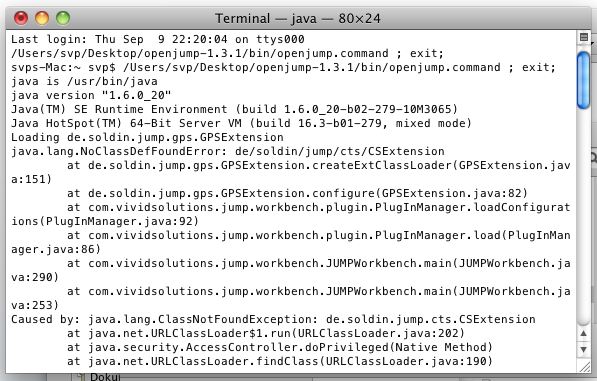 containing messages of GPS extension during startup. Like this

Linux users: If the console does not come up, please

Now look for a part that starts like this

A little later on there will be either

If RXTX succeeded loading is shown, then continue with 'RXTX load's but serial device is missing'.

Try to find a native library for your operating system. For example on [1] or [2]. Put the file librxtxSerial.<dll,so,jnilib> into

to force the GPS extension to try to load it.

Make sure the serial device for the GPS receiver was created. Write down it's name. Add

to the parameters of your java runtime and force RXTX hereby to detect this device.

Close the GPS Options window and turn on the GPS Tracker from the GPS menu (Fig. 4). 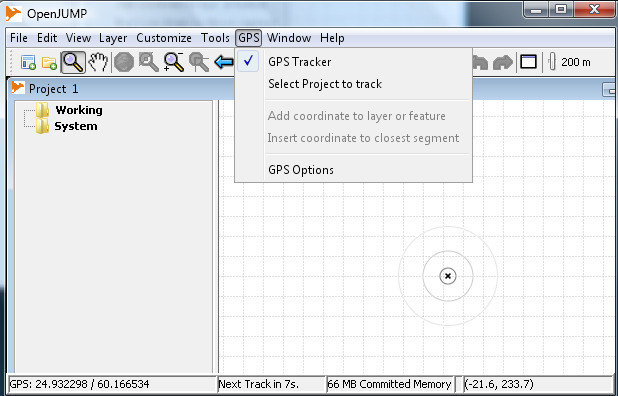 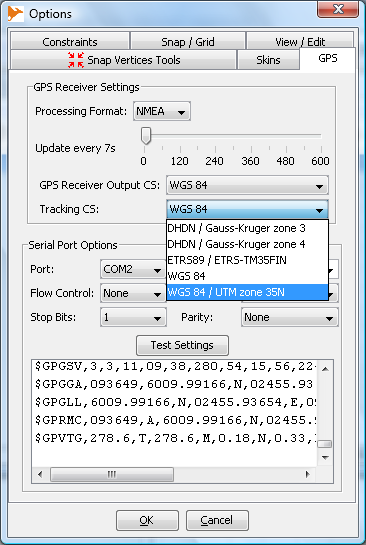 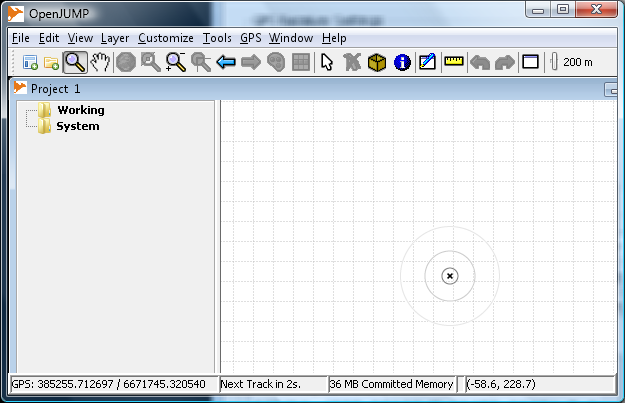 together with vector files

The next example illustrates how to use GPS plugin together with a shapefile. Shapefile in this example is OpenStreetMap roads, downloaded from Geofabrik http://download.geofabrik.de/osm/europe/ Roads shapefile is in the WGS 84 projection (EPSG:4326) and when GPS plugin is configured accordingly the location seems to be somewhere in the Southern Finland (Fig. 7). 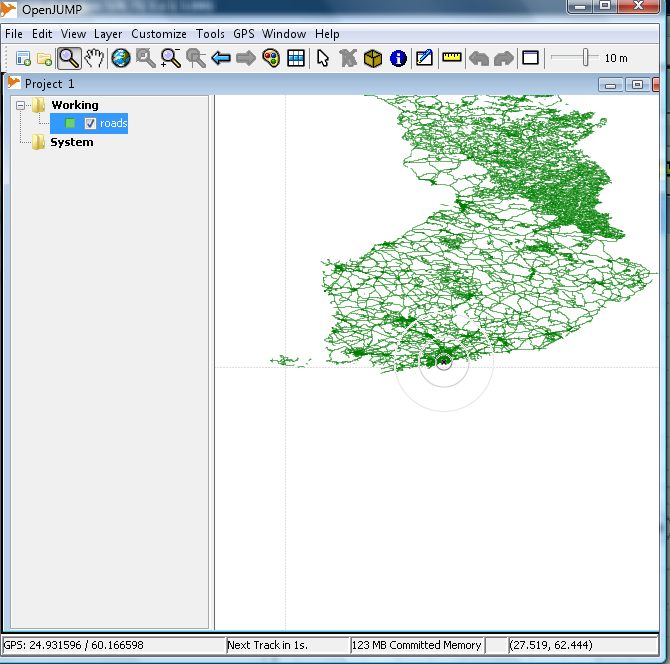 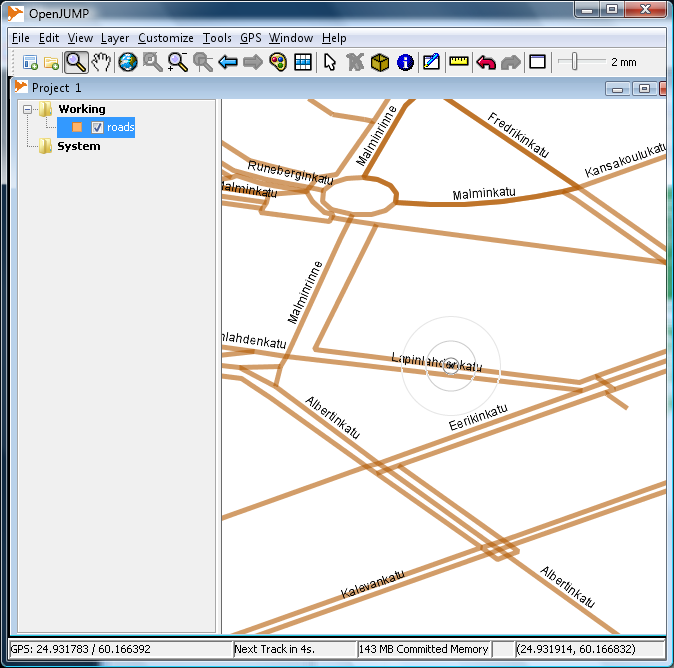 with raster images, vectors from a database, and other projections

Figures 9 and 10 are showing how to add two vector layers from a PostGIS database with the OpenJUMP standard Run Datastore Query tool. The first one is creating a park bench layer, the second finds out some waste baskets. Data in again OpenStreetMap data which is downloaded from Geofabrik in native osm format and imported into PostGIS database with osm2pgsql utility. Osm2pgsql was run with the -k parameter for getting all the OpenStreetMap tags into the database. After import the data in the PostGIS database was reprojected into EPSG:3067 projection, which is about the same as EPSG:32635. 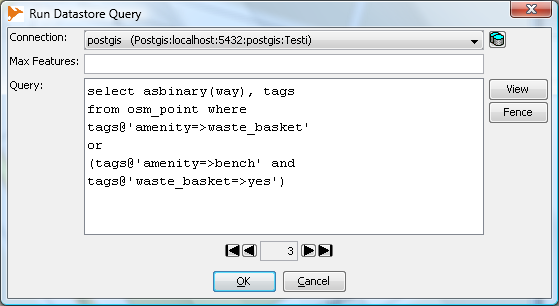 Figure 11 shows an OpenJUMP task that is ready to be used for a field survey. 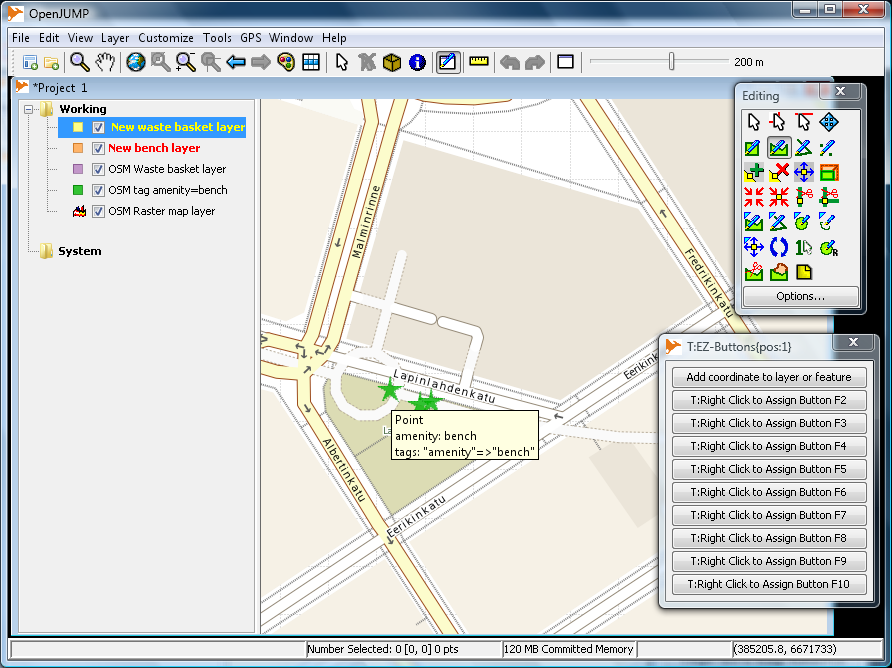 Map layers in this task are

- View - Map Tooltips is selected for getting the mouse-over functionality

- EZ-Buttons are used for giving a large button for recordind GPS locations. F1 function key can be used for the same purpose 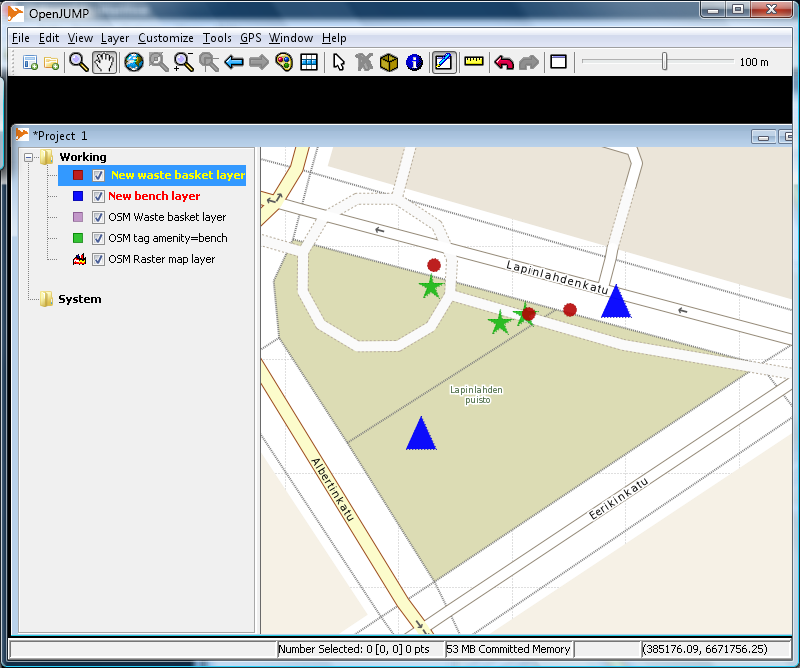