There are two plugins that allow to use SpatiaLite with OpenJUMP:

Note: Does not work properly with OpenJUMP 1.4. Use version 1.3 instead.

this has been written by Jukka:

Getting the plugin and SQLite driver

I did my first test with the pure Java driver downloaded from zentus and plugin worked with it. However, next day I could not access the zentus web site any more. Fortunately I managed to find another SQLite JDBC driver from www.xerial.org and that worked with DB Query plugin as well. The one I used is this:

Installation is done simply by unzipping the contents of jumpdbplugin.zip and SQLite JDBC driver into bin\ext folder of OpenJUMP.

DB Query plugin is configured by editing file "dbquery.properties" that is located at bin\ext folder. With Spatialite there is not much to configure, but there is a typo in the default properties file that comes with plugin version 0.7.0 and it needs to be corrected by hand. Note, that this problem has been corrected with the DB Query Plugin Version 0.7.1.

The classpath is wrong and is must be corrected like this:

Now the installation should be ready. This can be verified partly by starting OpenJUMP and checking if there new selection "Database Query" in the Tools menu list.

Creating a Spatialite database for testing

An easy way to create a Spatialite database for testing is to import some shapefiles with Spatialite-GUI utility. It can be downloaded from http://www.gaia-gis.it/spatialite/binaries.html Running Spatialite-GUI is simple, it is only one executable file. The rest of the process is described below with a bunch of screen captures. Shapefiles in the example come from http://download.geofabrik.de/osm/europe/germany/ I used zip file "berlin.shp.zip" but that is not important, any shapefiles will do. 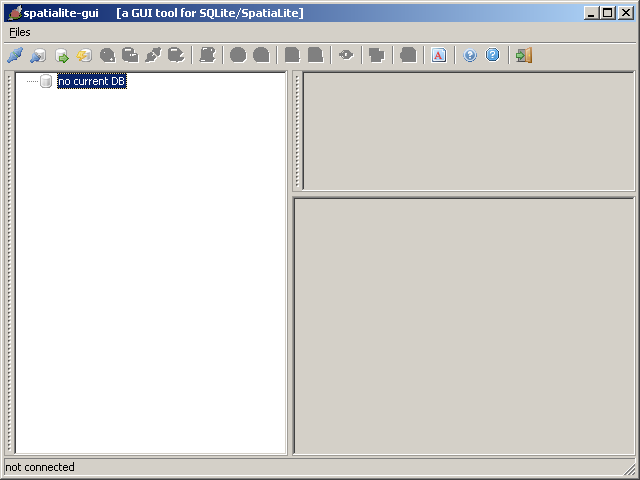 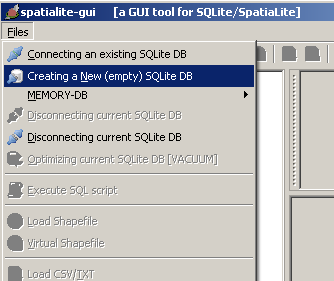 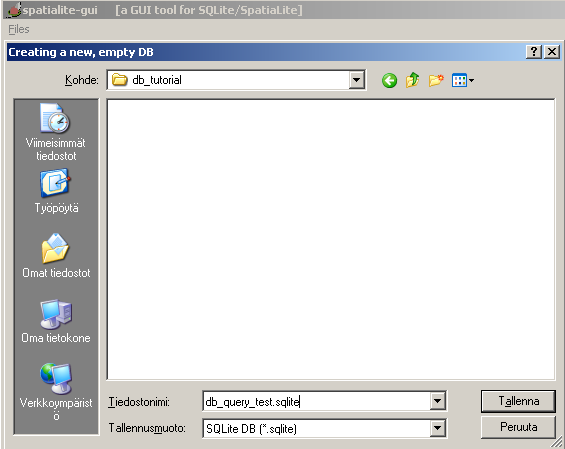 Select file path and feed in the name of the new database. 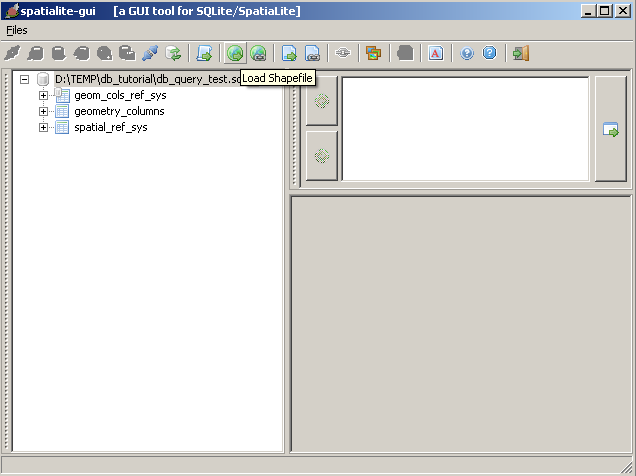 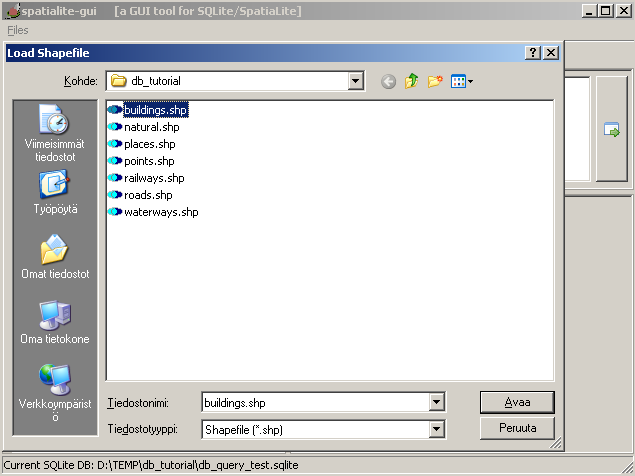 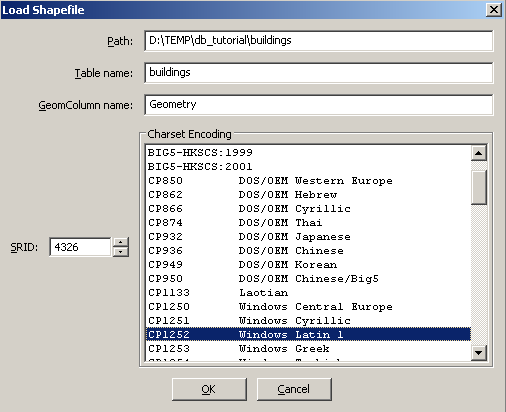 Feed in the table name to be used in the database, projection of the data and character encoding (with Geofabrik shapefile the correct setting is probably UTF-8 but there were some import problems when using it). 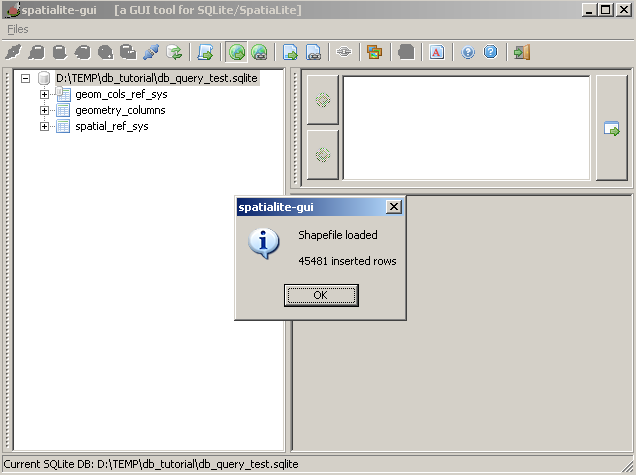 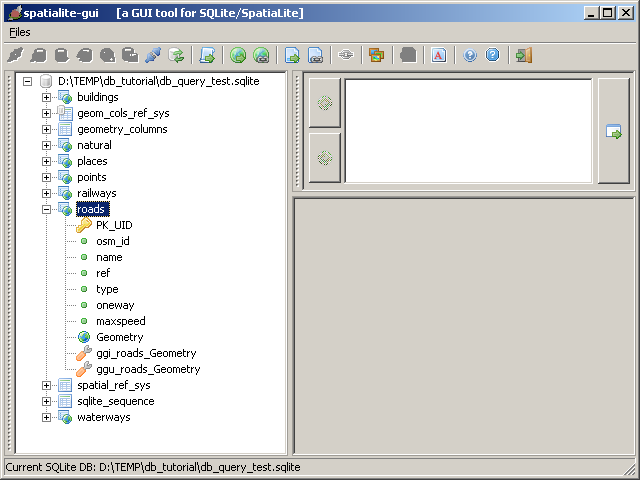 View after importing a bunch of shapefiles. Layer "roads" widened to show the fields in the table. "Geometry" holds the geometries. Attribute fields are "osm_id", "name", "ref", "type", "oneway" and "maxspeed".

Everything is now ready for the real test. DB Query Plugin is installed and there is a test database named db_query_test.sqlite located in the folder D:\TEMP\db_tutorial\ 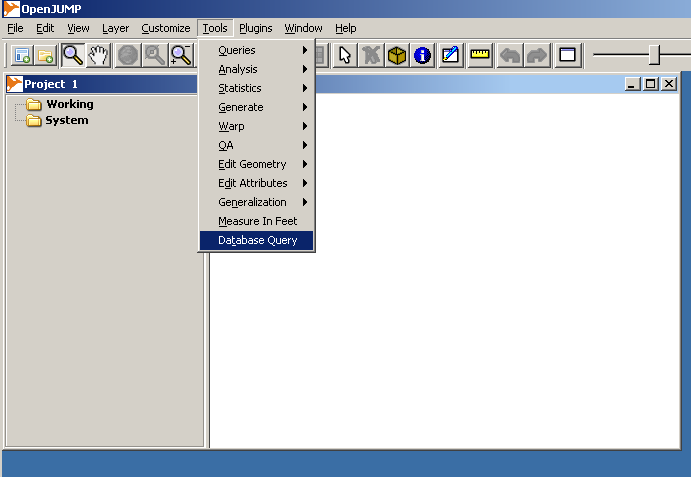 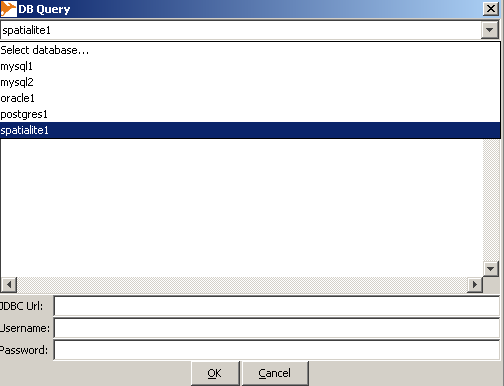 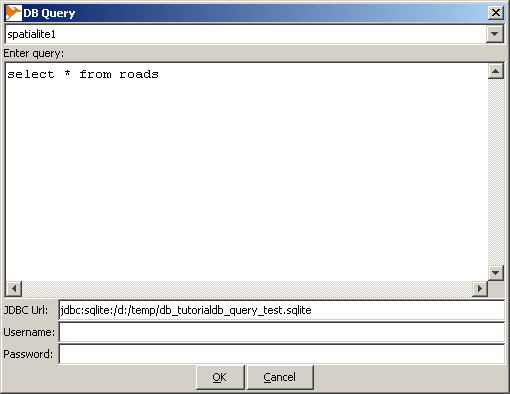 Entering the query. Windows accepts both forward and back slashes in the database path. Remember to insert some SELECT into query, otherwise you will not get anything back. 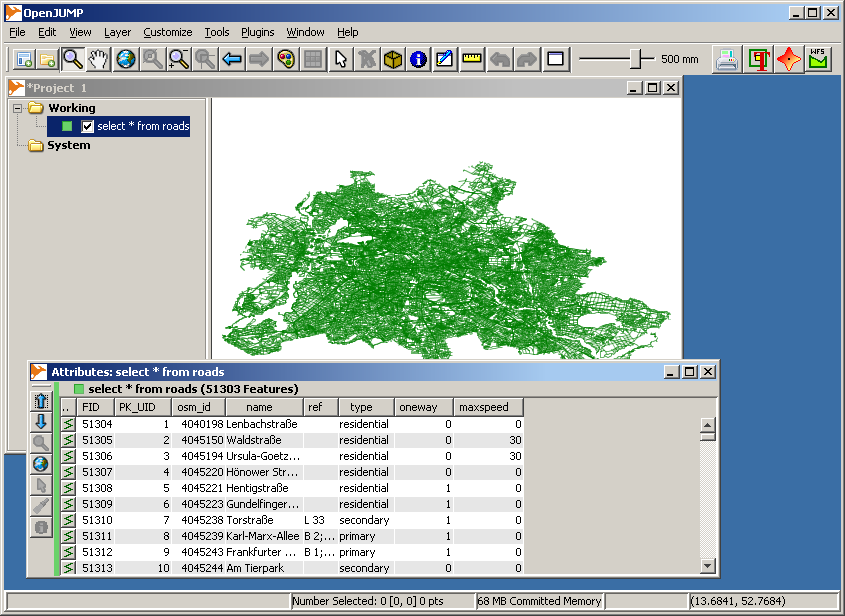 The result of the query. 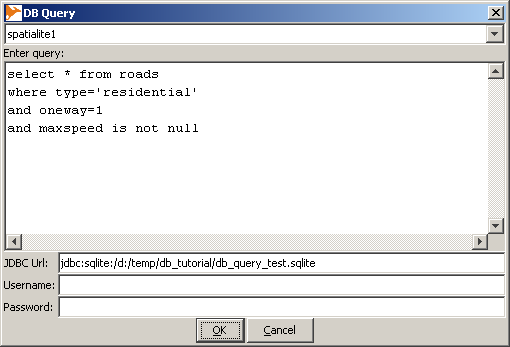 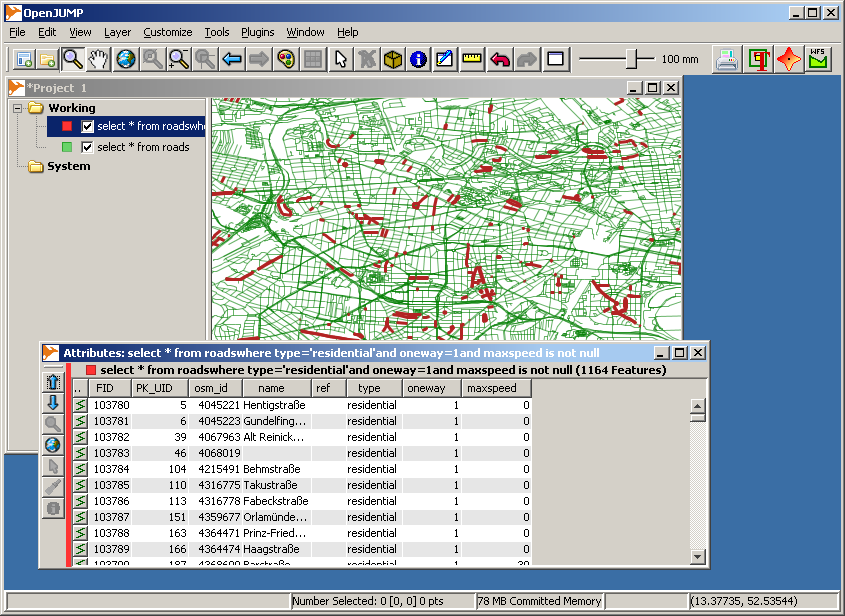 The result of the query above. Maximum speed of 0 km/h may feel odd. We will return to this later. 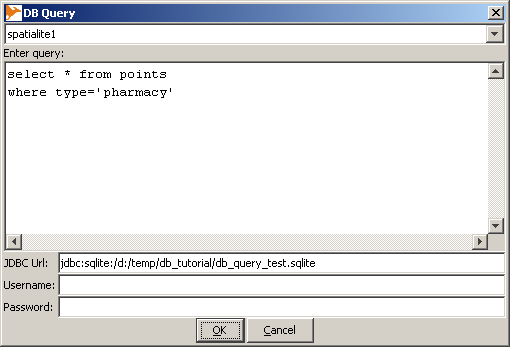 It is a real database with more than one layer. 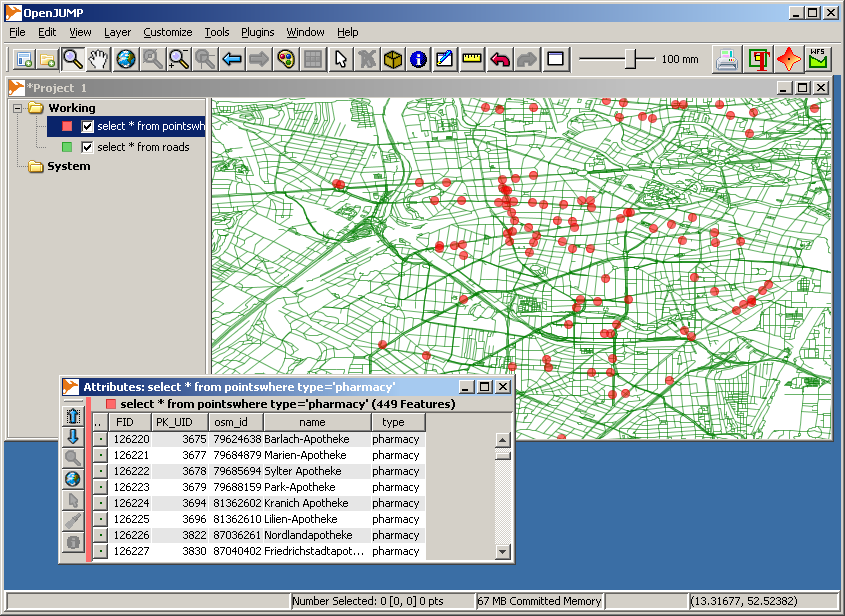 Some typical errors are error when writing the location of the Spatialite database or in the SQL queries. DB Query Plugin gives often rather understandable error messages.

There are many ways to store spatial data in SQLite databases. DB Query Plugin understands many alternative methods but there may be problems in interoperability. In such case try to open the database with other tools and possibly write is again by extracting layers first into shapefiles and importing them back to a new database. Spatialite-GUI and DB Query Plugin seem to play together.

Hint: Limiting the size of the query result

Spatialite databases can be big. They work fine at least up till many gigabytes. Selecting the whole table with

may give more data than OpenJUMP can handle in the memory. Use LIMIT for limiting the number of rows returned by the query. For example, to select at maximum 1000 rows use

Getting the plugin and SQLite driver

The readme.txt file is listing two URLs for downloading Spatialite precompiled libraries and SQLite3 JDBC driver. However, the zip file contained all the drivers needed for Windows. The plugin is using platform dependent components and for Linux and OS X users the plugin won't work as it is.

Windows users can just unzip the spatialliteplugin1.1.zip into bin\ext folder of OpenJUMP and the plugin is ready for use. After successful installation there is a new menu item: Layer - Import Spatialite Layer.

The next examples are using the same Spatialite database as the previous tests with DB Query Plugin. The database is just renamed to "spatialitereader_test.sqlite" 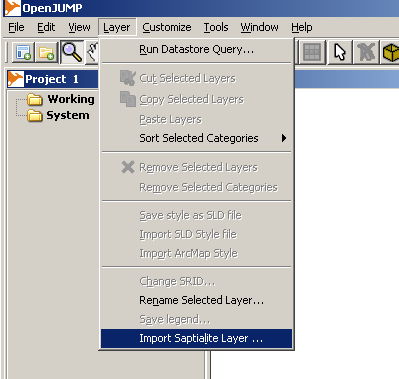 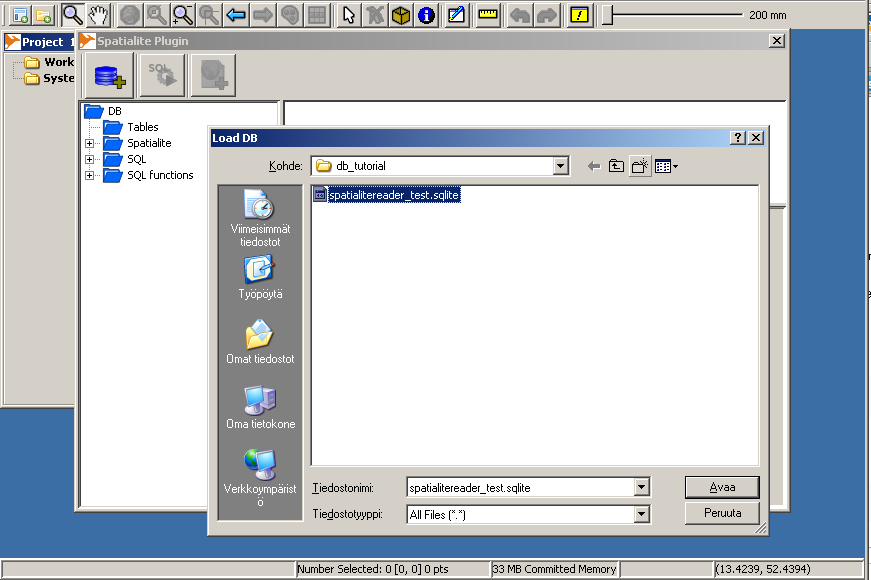 Press the only active button "+" and search the Spatialite database file. 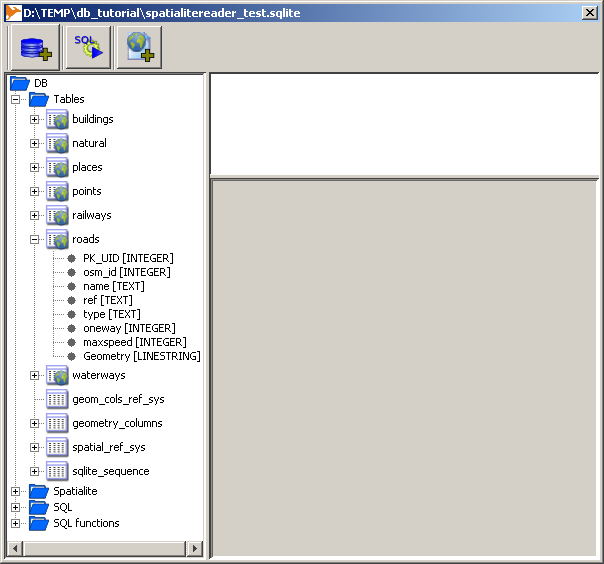 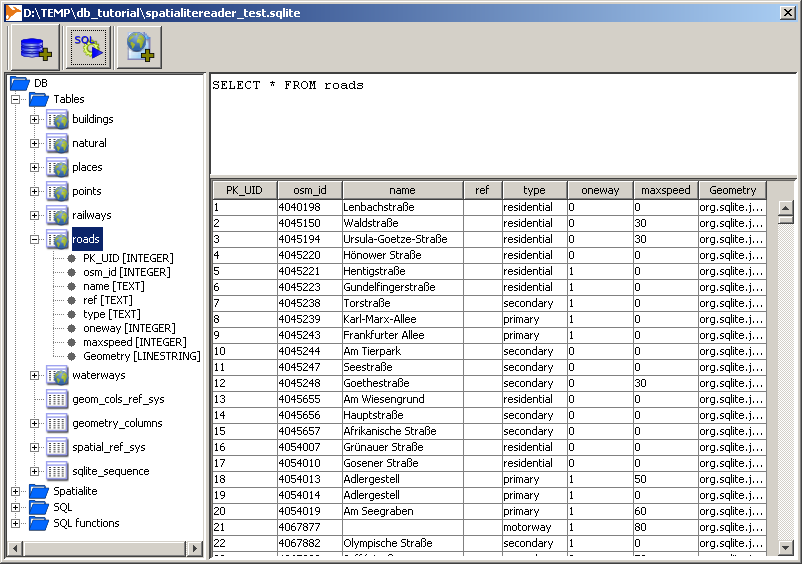 By double clicking the layer title "roads" the SELECT clause is created automatically. You can also write is directly to the text box. The second button "SQL >" makes the query and lists results in the form without transferring them into OpenJUMP map yet. 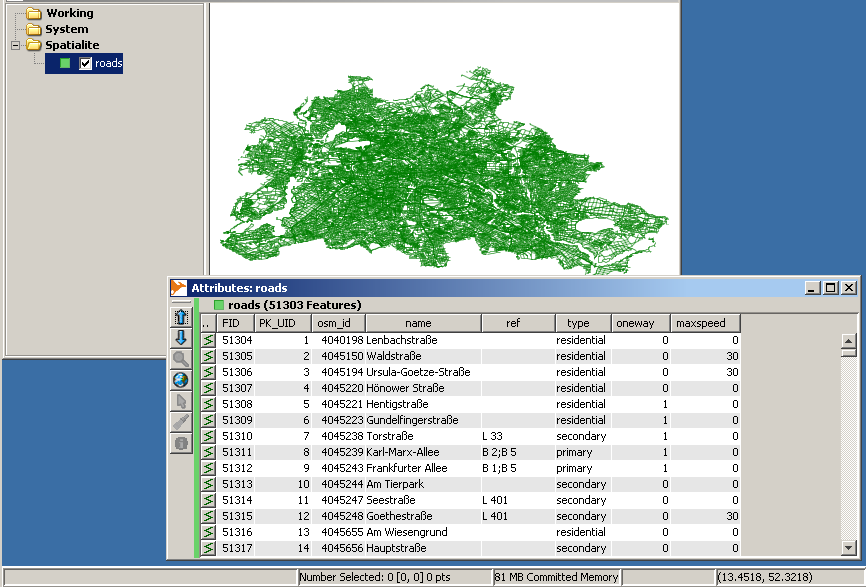 After pressing the third button the query results, including geometries, are sent to OpenJUMP. 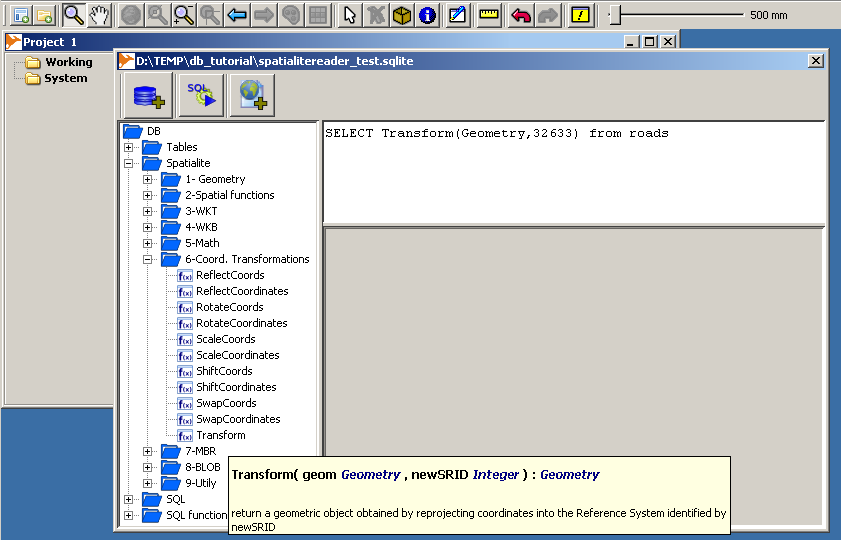 With the Spatialite reader plugin you can reach all the Spatialite functions through a menu. Menu items have tooltip help entries and double click tranfers a prototype text into query window. This query will return the road geometries in WGS84 UTM zone 33 projection (EPSG:32633). 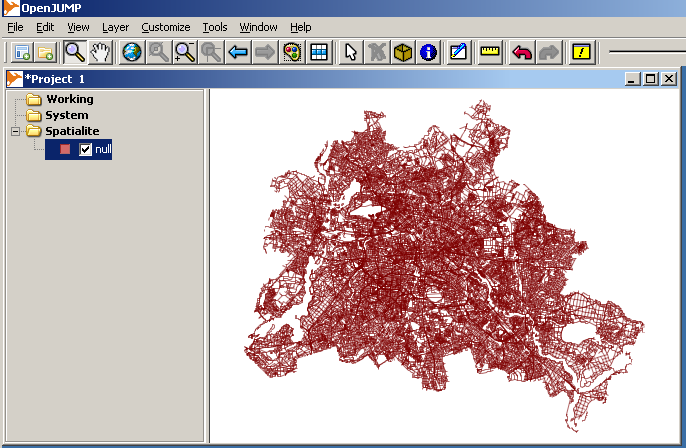 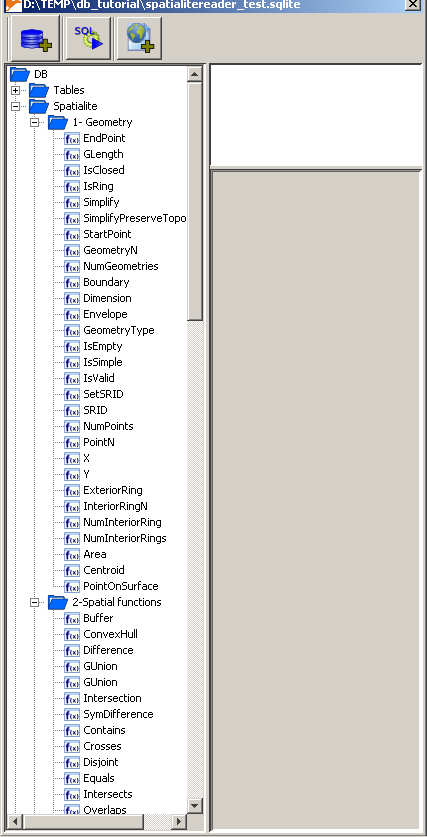 This is not a Spatialite tutorial, but these two screenshots should give some idea about what kind of operations can be done inside Spatialite and visualised with OpenJUMP 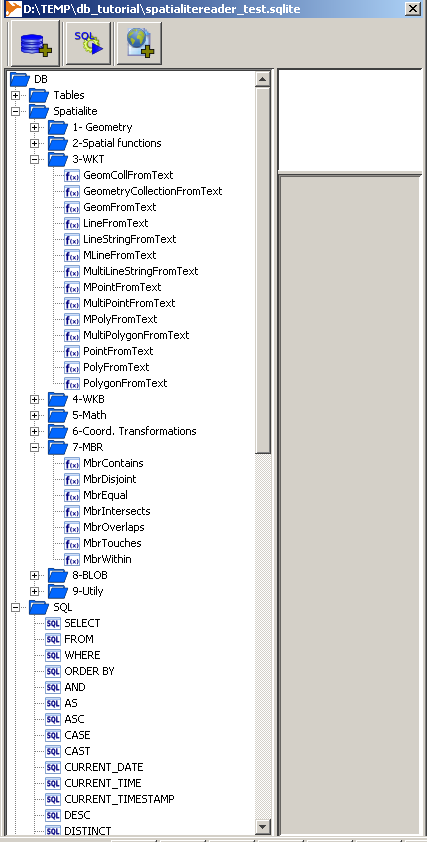 It is not possible to update Spatialite features which are read into OpenJUMP. However, the SQL window of the plugin connects directly to SpatiaLite database and thus everything that can be done with Spatialite SQL is doable through the plugin as well. For example, updating the "roads" layer by changing all maxpeed=0 values into null (empty) values goes easily. Error message "No ResultSet was produced" indicates only that nothing was selected from the database. A new query SELECT * FROM roads will show that the values were really updated. 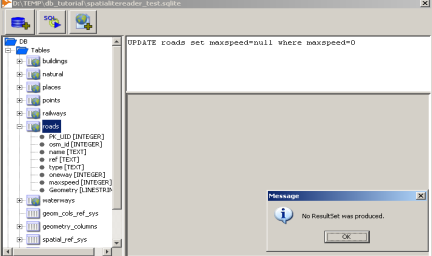