Since August 2013 OpenJUMP Plus version has a native support for opening OpenStreetMap XML data. OpenJUMP can open .osm files either as uncompressed or from zip or bzip archive files.

The OpenJUMP OSM driver is utilizing JOSM code and therefore the input data must contain the same metadata tags which are needed by JOSM.

OpenJUMP is a Java program which is running totally in memory. Therefore the amount of available memory is limiting how big OSM-XML files can be opened. OpenJUMP needs roughly 2-3 times as much memory than the size of the OSM-XML file to be opened. Conversion is quite fast if the OSM dataset is not too big. For example berlin-latest.osm from www.geofabrik.de (455 MB, 529234 map features) opens in 50 seconds with laptop running 64-bit JRE 1.7.0 (Oracle) on Windows 7 with 8 GB of memory and Intel Core i7 2760QM processor. Sachsen-latest.osm (1.7 GB, 1.52 million map features) takes 3 minutes and 30 seconds with the same computer.

Note that OSM data are in geographic coordinates (WGS84, EPSG code: 4326), so the display of rectangular roads and buildings seems to be skewed. OpenJUMPs CTS Extension can help you to bring the data into you preferred cartographic projection.

Getting a suitable OpenJUMP version

At the moment a development version of OpenJUMP Plus is needed and the revision should be r3662 or higher. Snapshot versions of OpenJUMP can be downloaded from http://sourceforge.net/projects/jump-pilot/files/OpenJUMP_snapshots/

Getting some OpenStreetMap XML data

Small extracts of OpenStreetMap XML data can be downloaded through the map window of the main OpenStreetMap site http://www.openstreetmap.org 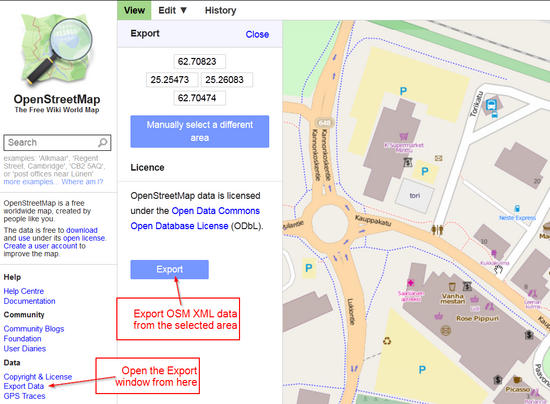 It is also possible to use JOSM editor for downloading data and saving osm files on disk. However, for bigger data extracts and for reading filtered data it is recommended to use an API service like OverPASS API: http://wiki.openstreetmap.org/wiki/Overpass_API

Advanced features of Overpass API are described in the above mentioned wiki page and in the main site http://www.overpass-api.de/. However, simple queries can be created by using this web application: http://harrywood.co.uk/maps/uixapi/xapi.html

This request must be edited before it can be used for capturing data for OpenJUMP because OSM driver needs some additional metadata which can be obtained by adding parameter [@meta].

Advanced users can use OSM extracts from Geofabrik and filter data for example with Osmosis or Osmfilter for preparing OSM datasets for OpenJUMP.

Reading OSM data with OpenJUMP Plus

OSM data files are opened with OpenJUMP as any other supported file formats through File – Open menu. 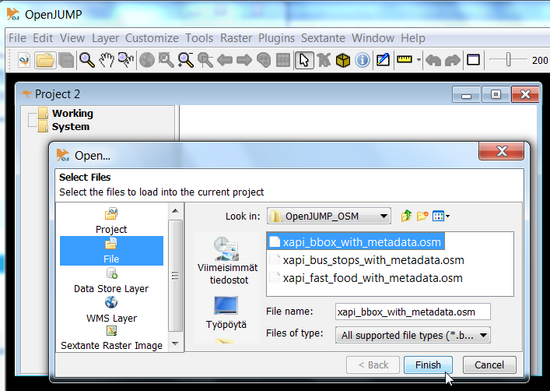 OpenJUMP imports all the OSM features on one map layer. The schema of the layer is fixed and hardcoded in the OSM driver code. 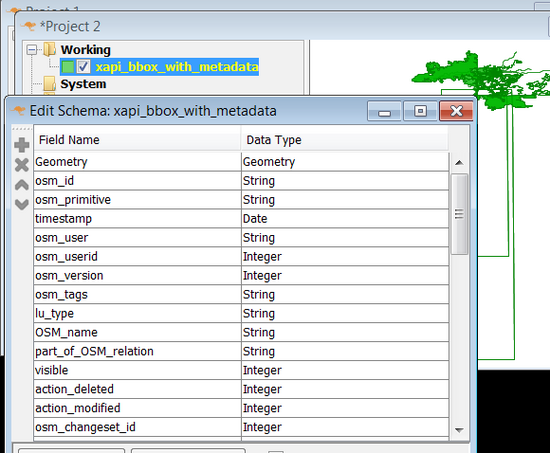 The osm_tags column contains all the OSM tags concatenated into one text string. Column lu_type contains the result of classification. The classification rules are hardcoded. Special tag part_of_OSM_relation holds two pieces of information. First one tells if the feature is acting as a member in some relation. The other part is filled only for features which are relations themselves and it shows if all the members of the relation have been found or not. 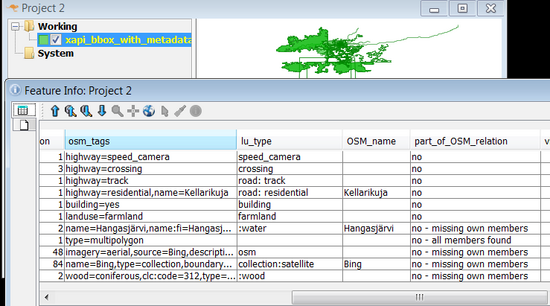 Reading all types of geometries suits well for internal data model of OpenJUMP but otherwise it may not be very practical. For example it may be impossible to define rendering rules which make sense for such mixed layer. However, OpenJUMP has some tools which can be used for filtering and categorizing OSM data once they have been imported.

OSM layer can be divided into separate layers for each geometry type with the Edit>Extract>Extract Layers by Geometry Type tool. 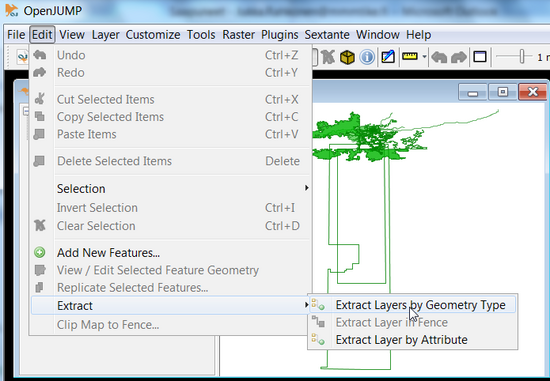 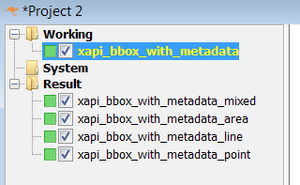 This example shows the OSM bus stops which were fetched from XAPI on top of a WMS base map. 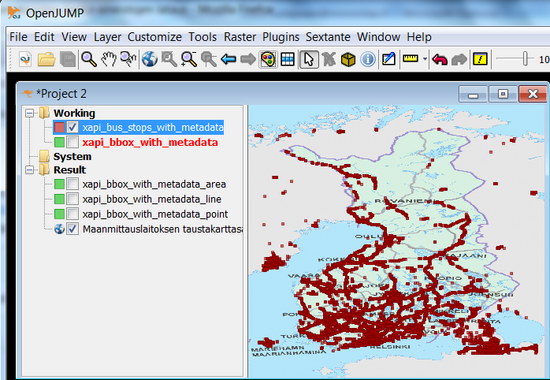 OpenJUMP can extract layers also by distinct values of any attribute (Edit>Extract>Extract Layer by Attribute). In this example a new layer will be created for each OSM username that appears in the data. 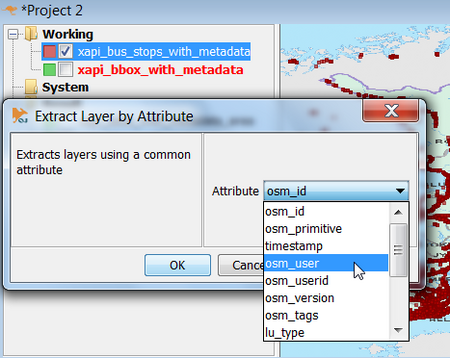 Layers in the catagory can be sorted by the number of features they contain. We want to check the most active OSM bus stop mappers now.

As can be seen from the following screenshot: OSM contributor ”Pikari” edited 4701 bus stops. 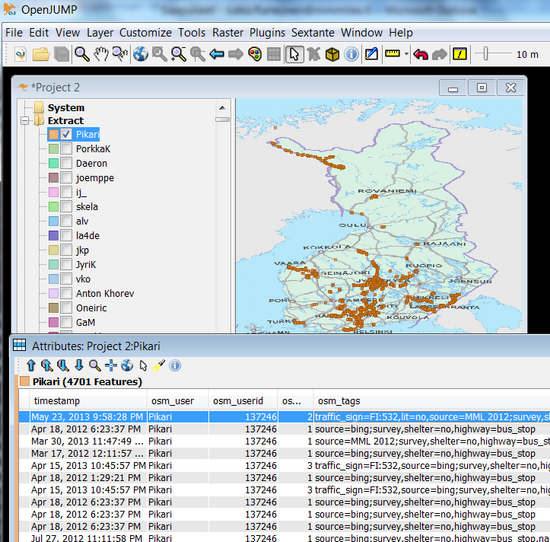 OpenJUMP OSM driver offers a direct way for using OSM data in a desktop GIS program. However, OSM data are converted rather brute-force into the OGC simple features (geometry types) with a fixed attribute schema. While all the tags included in the OSM data are preserved as a concatenated text string, it is not easy to utilize them in a productive way. It is best to regard the initial release of the driver in August 2013 as something that can lead to more practical applications in the future. Because the OpenJUMP OSM driver is using the well-known JTS library and also parts of the well known JOSM code base it should give a solid base for other Java programmers to go on with development.